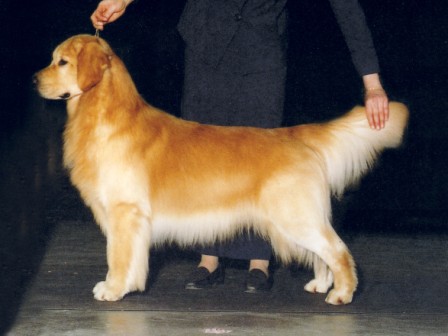 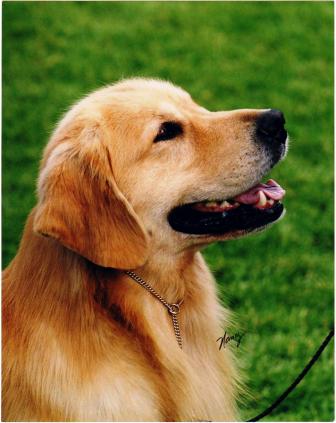 Biography:
Bond is a once in a lifetime dog. He is of exceptional quality with an exceptional temperament, and attitude as he loves to show. He was campaigned in 1999 and ended up with 7,000 points making him the # 8 All Breed, #2 Sporting Dog and the # 1 Golden Retriever in Canada. Bond’s sire was the top winning golden retriever in the US, Ch. Asterling’s Wild Blue Yonder, who won 52 Best in Shows during his lifetime. Bond has won a total of 17 Best in Shows, including 2 consecutive wins at Canada’s Largest Show, Lower Mainland. He has also won a number of Best in Specialty Shows and a Group 1 placing in the US. All of this thanks to Heidi Gervais, handler extraordinaire. They were a great team. Bond is also an Outstanding Sire as he has sired several champion including group winning pups. Bond is available for stud service to approved bitches. All females being bred to Bond must have their health clearances and they must meet the golden retriever conformation standard, preferrably with a championship title. ————————————————————————————————————————————— BIS BISS AM/CAN CH. GOLDENMOMENT?S OO7’S BOND SDHF ?BOND? DOB: February 19, 1996 Height: 23.5 inches Weight: 75 – 80 pounds Mouth: Full dentition with a good scissors bite Color: Honey Gold with near white furnishings —————————————————————————————————————— Bond is one marvellous dog. To date, Bond has won 17 Best in Shows in Canada and Two Best in Specialty Shows. He also won the Stud Dog class at the BC Western Regional Specialty. He was campaigned by Heidi Gervais in 1999 and achieved # 8 All breed dog in Canada, #2 Sporting dog and #1 Golden status in Canada in 1999. He was the first golden who broke the winning record for goldens since 1987. Bond has achieved his Show Dog Hall of Fame in Canada, which consists of 50 points from group wins and his American Championships, in only 9 or 10 shows, winning 5 majors and a group 1st. Currently he has about 12,000 points. Bond?s Best in Show wins were won at the largest shows in Canada, and in the year 2000, at the Prestigious Lower Mainland show, he won over $2000.00 in cash as well as the BIS ribbon. The judge was from Spain and she organized the world show last year. Bond has won BIS?s under several international judges, from Ireland, Australia, South America and Spain. Bond has been winning because he is a beautiful golden with great movement and lots of ?presence? that makes him stand out. His handler, Heidi, did an outstanding job handling him and it was the first time she had showed a dog in the top 10 all breeds in Canada. Bond is an intelligent dog who is known for his beautiful temperament. He is not aggressive toward other dogs. Bond loves to retrieve in water and the next plan is to achieve his Working Certificate. Bond will swim across the river to retrieve a training dummy. At home, Bond is a house dog as he wants lie at your feet. Bond has produced some nice pups which look like him. Bond, a tightly line bred dog, with an outstanding pedigree. His sire, American champion, Asterling?s Wild Blue Yonder, known as James, was the top winning golden in American history, winning 52 Best In Shows in the USA. I owned Bond?s dam, Champion Brookshires?s Aurora Gold.. She was absolutely lovely and she recently won the Brood Bitch class at a Sporting Dog Specialty. SEE GRReview, Feb?97 for her picture.